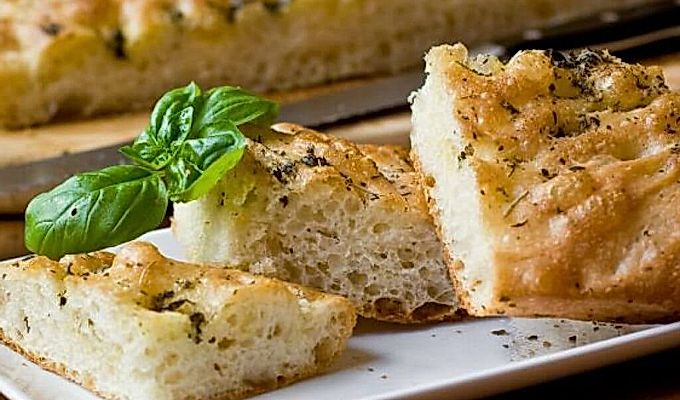 Italian cuisine is distinguished by its culinary variety. The richness of flavors has become the reason for its immense popularity throughout the world. Italy is the birthplace of not only the world-famous pasta, lasagna and pizza, but also bakery products and pastries.

Focaccia is a traditional Italian bread in the form of a flatbread. Focaccia is believed to be the origin of the pizza base. In ancient times, it was the food of ordinary peasants, fishermen and soldiers.

Focaccia is made from unleavened, butter and yeast dough. Accordingly, such cakes differ in appearance. They are tall, semi-tall and thin (flat). They are served as bread for dinner and are sometimes used to make pizza.

Most often, focaccia is prepared with fillings or toppings (toppings located on top). As a filling, they use ingredients that Italian cuisine is rich in: cheeses (hard or soft creamy), prosciutto ham, olives, eggplant, bell peppers, tomatoes, onions and even cherries. Delicious tortillas are obtained with the addition of herbs (rosemary, oregano, sage, basil, arugula, dill, parsley) and crushed garlic with olive oil, which is applied to the top of an already baked tortilla [1]

Outside Italy, the recipe for this flatbread has been adapted. With an American flavor in mind: focaccia with potatoes is popular in New York.

Focaccia is used to make Italian snack breads - bruschetta and crostini. If you cut it into pieces, heat it up, grate it with garlic, brush it with olive oil, and put a slice of ham, sun-dried tomato, cheese or other filling on top, you get a bruschetta. To make crostini, the focaccia is cut and eaten, greased with pesto, tomato or other sauce.

Focaccia is traditionally made with four essential ingredients: wheat flour, olive oil, water and salt [2] yeast. Some bakers add milk to the dough to make the cake more fluffy. 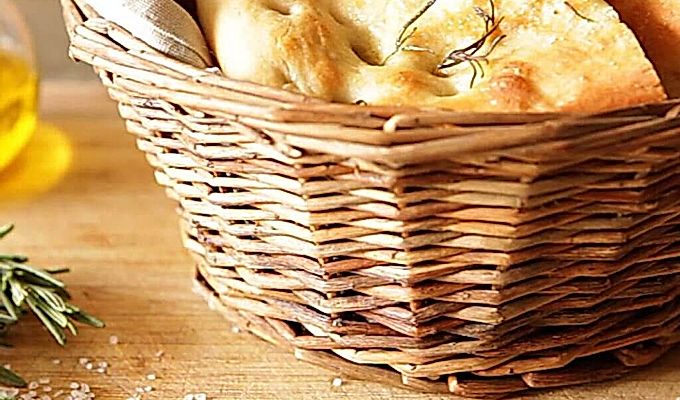 In different Italian regions, focaccia is baked, which differs in the type of dough, shape and fillings:

Focaccia is primarily a baked product, therefore it is a source of carbohydrates. The nutritional value of these flatbreads largely depends on the type of flour used to make it. Flatbread baked with durum wheat flour is rich in fiber, minerals and vitamins [4]

The proteins contained in the dough are mainly represented by gluten (gluten). Among the amino acids in the protein molecules of the focaccia cake, glutamic acid, proline and leucine predominate.

Since the dough contains olive oil, focaccia contains unsaturated fatty acids and fat-soluble vitamins (A and E). The vitamin and mineral composition of Italian focaccia bread, prepared according to the classic recipe, includes:

The addition of the filling to the cake changes its chemical composition, nutritional value and energy value. 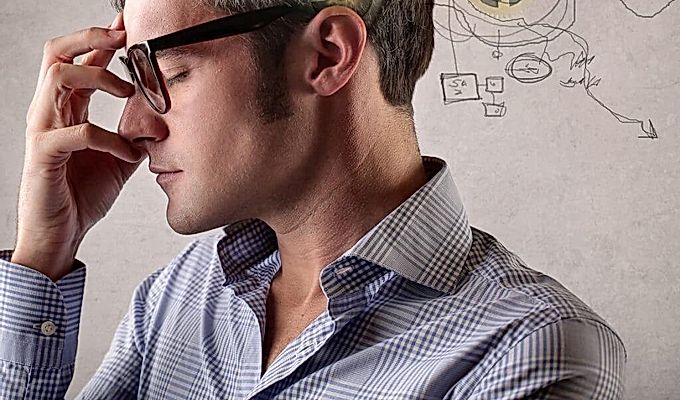 Focaccia in her homeland is baked most often from durum wheat flour. It contains a lot of fiber, which has a mechanical effect on the gastrointestinal tract, stimulates the secretion of digestive juices, and accelerates intestinal motility.

Focaccia contains a large amount of glutamic acid, which is known as a powerful neurostimulant, it is a direct conductor of nerve impulses in the brain, and is also involved in the synthesis of such biologically active substances. Like folic acid (vitamin B9) and serotonin, which also stimulate brain activity [8]

The amino acid proline, carotenoids and vitamin E affect the condition of the skin, nails and hair. They increase the turgor (elasticity) of the skin, protect against premature aging, solar radiation and infections, accelerate recovery from damage [9]

Focaccia is a high-calorie product and a source of carbohydrates, so it is useful for schoolchildren and students (especially during tests and exams), athletes to build muscle mass, people after serious illnesses, and malnourished patients. Healthy people should consume this classic Italian bread in moderation, no more than 150-200 g per day.

Italian focaccia is a baked goods rich in carbohydrates. Due to its high carbohydrate content, it is contraindicated for people with diabetes mellitus, as well as for those who follow a weight loss diet.

The gluten present in wheat flour is also preserved in finished baked goods, so people with celiac disease are not recommended to consume focaccia.

Wheat flour proteins in the process of splitting in the human body form purines, therefore it is forbidden to include this bread in the diet for people suffering from gout or urolithiasis. 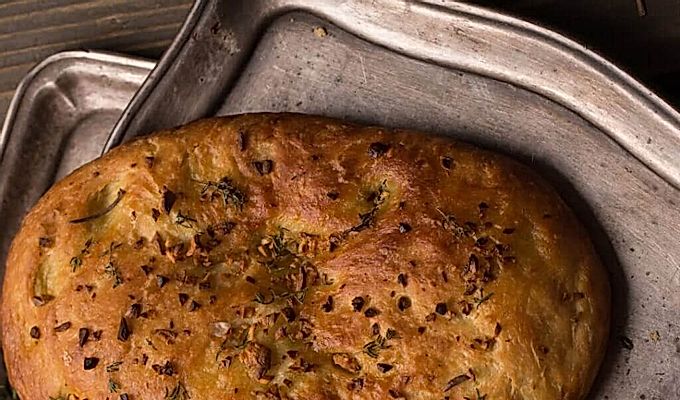 There are a lot of recipes for making this traditional Italian bread. To bake a classic fluffy focaccia without filling, you can use the following recipe [10]

To prepare it, you need to take 1 glass of water, 300 g of flour, 1 tsp of salt and sugar, 8 g of yeast, 4 tablespoons of olive oil, a pinch of chopped herbs (oregano, rosemary, basil).

Dissolve yeast, salt and sugar in warm (38-40 ° C) water, add 3 tablespoons of sifted flour, stir until smooth. Cover the dough with a cotton towel and leave to ferment for 15-20 minutes. Stir the dough, add herbs and remaining flour. Make a depression in the center of the dough container and pour in the olive oil. After kneading the dough until it stops sticking to your fingers, put it in a bowl and leave it in a warm place for an hour and a half. In this case, after 45 minutes from the beginning of the proofing, the dough must be kneaded again.

Roll out the finished dough to the size of a mold or baking sheet (the height of the dough should be 2-2.5 cm), put in a baking dish on parchment greased with olive oil. With the fingers of both hands, make holes over the entire surface of the dough, and drip a little oil into the holes.

Turn on the oven at 200 ° C. While the oven is heating up, the dough will come up a little more.

Bake the cake until golden brown, usually 20-25 minutes. After baking, you need to let the focaccia "lie down" a little on the wire rack or board, covering it with a cotton towel.

This recipe can be modified according to the wishes of the baker. For example, you can put olives in the holes on the surface of the dough before baking, put tomato slices or other ingredients on top.

To make the focaccia lush, fragrant, with a crispy crust, there are some culinary tricks in its baking:

These culinary tricks will help even the novice cook get great results the first time.

Focaccia is a bread in the form of a flatbread, which is the national dish of Italy. It is prepared from unleavened, yeast and even butter dough, with or without filling. It is used for making sandwiches, sandwiches, bruschetta, crostini. Focaccia is rarely used as a base for pizza.

The high calorie content, carbohydrate and fiber content, unsaturated fats and proteins make Italian bread useful for many people: for athletes, students during school, weakened and malnourished people. In order for focaccia to bring only benefits to the body, it must be prepared from durum wheat flour and consumed no more than 150-200 g per day.

The presence of gluten and purines in focaccia is a contraindication for its use for people suffering from celiac disease, urolithiasis, gout and obesity.

Italian bread can be made easily at home. In this case, cheeses, sausages and meat products, vegetables, olives, and herbs can be used as a filling.

How is focaccia different from bread?

Another difference between the two is the ingredients. If you're curious as to what is focaccia bread made of, well, the answer is it's usually a combination of a strong flour (meaning a high gluten flour like bread flour), extra virgin olive oil, yeast, herbs, spices, salt, and pepper.

What is special about focaccia bread?

Because it is pretty thick, focaccia can be sliced in half and used for making sandwiches . It's also a tasty addition to a bread basket or an accompaniment to a bowl of soup or a salad. A sweet version of focaccia can be eaten for dessert or even for breakfast as a replacement for toas

Is focaccia bread hard or soft?

What's the difference between focaccia and bread?

Is focaccia a type of bread?

Focaccia – This is a popular flat oven baked Italian bread reminiscent to pizza doughs in both texture and style. It is usually seasoned with olive oil, salt and sometimes herbs as well. Focaccia can be used as a side to many entrees, a solid base for pizza or as a sandwich bread.

Why is it called focaccia?

The name focaccia derives from the Roman “panis focacius,” meaning “hearth bread”, referring to the fact that focaccia was traditionally baked in coals in Roman times . Its recipe back then consisted of rough flour, olive oil, water, a very small quantity of yeast, and salt, and was probably quite plain.

Why is focaccia bread healthy?

Benefits for your figure and your health

Rather, focaccia provides complex carbohydrates that slowly give the body energy and help better regulate blood sugar levels ,” Schirò explains. If it's made with whole wheat flour then it's got an extra edge. “It provides a greater amount of vitamins, minerals and fibe

Why is focaccia bread important to Italy?

The Spread Of Focaccia

Since the medieval era, the Roman Catholic Church has used this bread commonly during their religious festivals . And of course, 20th century Italian immigrants to the US brought their recipes with them, leading to the popularity of many classic italian recipes and tradition

Focaccia is basically a yeasted flat bread. This is why it is also known as Italian flat bread. The dough of a focaccia is flavoured with olive oil and can sometimes be topped with herbs, vegetables and other toppings. Just like pizza dough, focaccia dough is made with flour, oil, water, yeast and salt .

Is focaccia a hard bread?

Focaccia is the king of Italian bread . It is a salty, olive oil-soaked flatbread that is both chewy and crisp and full of personality. I have been making bread and focaccia for years, and people always ask me why their focaccia is always too dense or why it didn't rise to name a few.

What texture should focaccia be?

A good focaccia, to me, should have a crisp, salty crust and a light, but slightly chewy texture . The mark of a good focaccia is those air pockets you see in the crumb. Just like our Persian flatbread, Barbar

How would you describe focaccia bread?

Focaccia is a classic Italian flat bread rich in olive oil and often flavored with fragrant herbs such as crushed rosemary. It can be served whole or sliced in half, then used to make panini, a popular type of Italian sandwich. Focaccia dough is closely related to that of pizza.

Should focaccia be thick or thin?

As a general rule of thumb, a classic Italian-style pizza crust will be less than half an inch thick while most focaccia will be at least three quarters of an inch thick . Also, focaccia is most commonly served at room temperature -- though you can also eat focaccia bread cold or toasted.