That plum pie from The New York Times

Cooking recipes are often referred to as "folk" and "favorites" to boost their popularity. But how to measure this love? Not in pots of borscht and barrels of pickles. The situation with the recipe for plum pie, which became the record holder for publications in The New York Times, is completely unique: for seven years the same recipe appeared in the newspaper in the same form at the request of readers. Of course, this was an era before the Internet, and then it was impossible to find the right recipe on the net, but still, you see, this is truly the measure of people's love.

We decided to bake the same pie in the editorial kitchen and understand what is so special about it. The result in the form of a detailed photo-master class is attached.

This story, which has already become a legend, has entered all culinary blogs, but we will repeat it in order to return to the original source. In September 1983, a plum pie recipe labeled "simple yet elegant" by The New York Times food editor Marian Burros was first published in the newspaper and received more than 5,000 responses. Considering that at that time letters to the newspaper were written with a pen on paper and sent by mail in envelopes, this was a record. Readers cooked a dozen pies at once, froze them for the future, rewrote the recipe for aunts and cousins, shared it with neighbors - in general, a resounding success.

Since then, the pie has appeared in the newspaper every September, changing slightly with the times. First, the editors cut the amount of sugar by a couple of spoons, then offered a recipe with a lower fat content (and there is really a lot of butter in the pie, maybe this is the secret of its popularity), and so on until 1989. Not a single recipe in the world could survive seven editions.

Finally, reluctantly, the editor decided that enough was enough: the last time the pie recipe came out on special hard paper with perforations around the edges, Marian herself strongly advised removing it from the strip and sticking it on the refrigerator. When the paper published a collection of its best recipes nearly a decade later, plum cake became number one and a classic.

We gave the original recipe a test drive and made sure that anyone can handle it.

Moreover, the proportions of the dough are close to the classic charlotte recipe - so don't be surprised if you get the feeling that you tried something similar on your grandmother's vacation. Finally, the recipe is good because you can change it indefinitely: stuff with any seasonal berries, nectarines, peaches or pears, use vanilla instead of cinnamon and orange juice instead of lemon. But still, the combination of tart, sweet and sour plums with cinnamon-sugar dressing is the most delicious.

In general, a universal thing that will come in handy both in winter and in summer. Which once again proves that in cooking, as in the modeling business, it is not so much the original appearance or exquisite taste that is important, but the ability to always be in place and please everyone without exception.

The basis of the pie is sweet pastry. Remove the butter from the refrigerator in advance so that it becomes soft. First, beat part of the butter (120 g) together with sugar (200 g). It is more convenient to do this with a mixer: the oil should become lush and pale, and the sugar should completely dissolve. 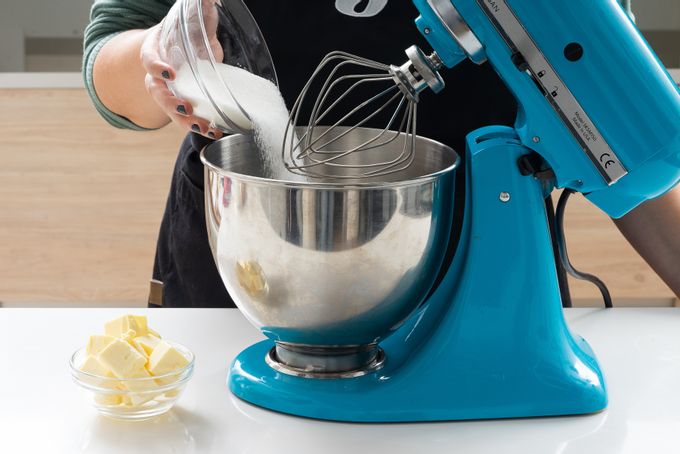 Mix two eggs into the oil mass - first one, then the other, waiting until the first one is completely connected with the future dough. 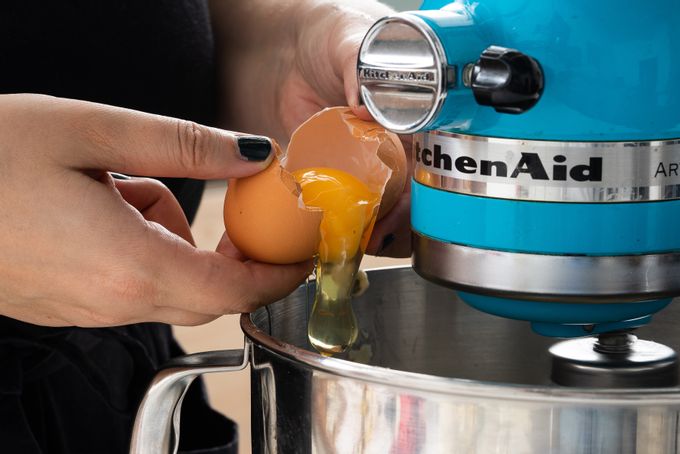 Measure out 150 grams of flour, add 1 teaspoon of baking powder and sift everything together in a separate bowl. Continuing to beat the butter with the eggs, gradually stir in the flour. Add salt and knead the dough until smooth. 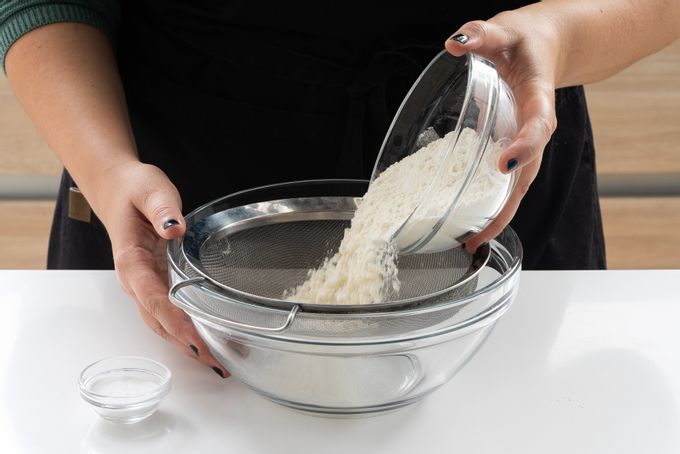 Line a 23–25 cm diameter mold with parchment paper and grease with butter. 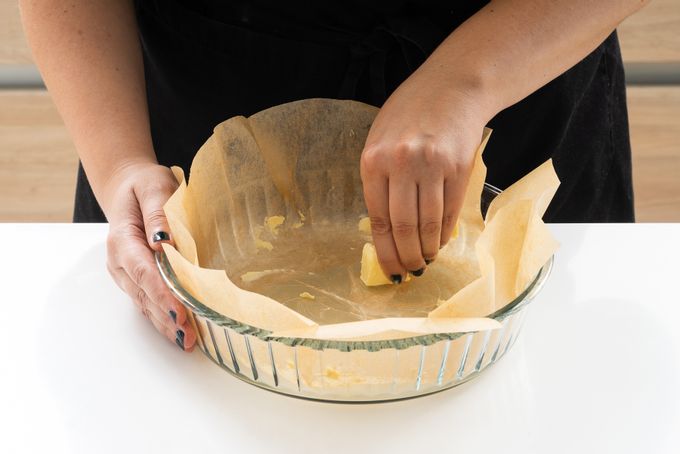 Large, round, firm plums like the Hungarian are best suited for this pie. You will need 8-12 pieces, depending on the size. Wash the plums, cut in half and remove the pit. 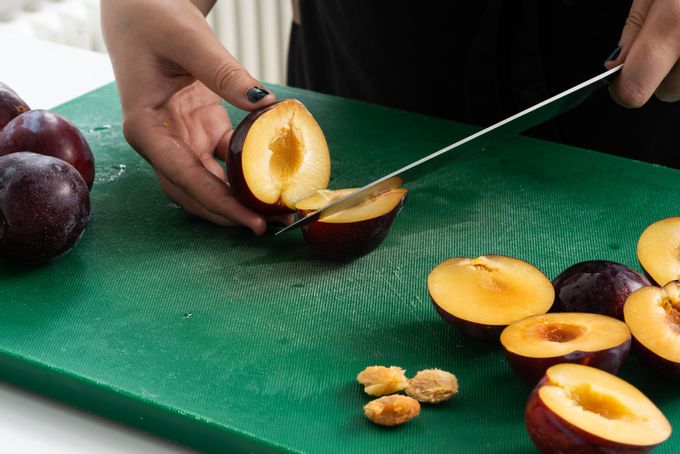 Place the plums in a bowl and stir in the lemon juice. 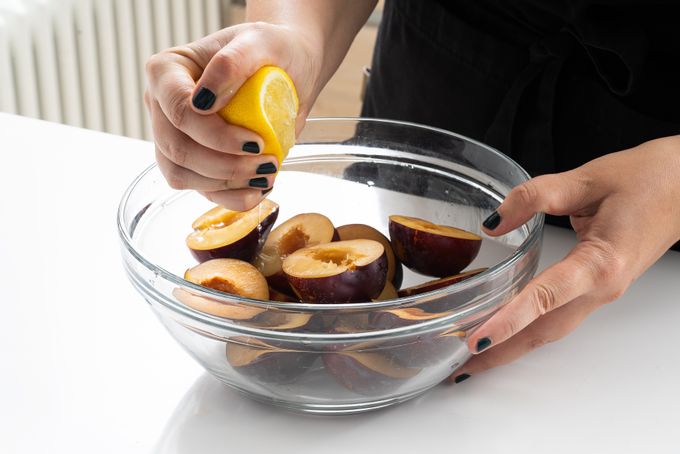 Lay the plum halves cut side down on the pastry, pressing them lightly into the surface of the pie. The important word here is “slightly” – you don’t need to be especially zealous. As practice has shown, during the baking process, plums have a tendency to fall into the dough rather than jump out of it. 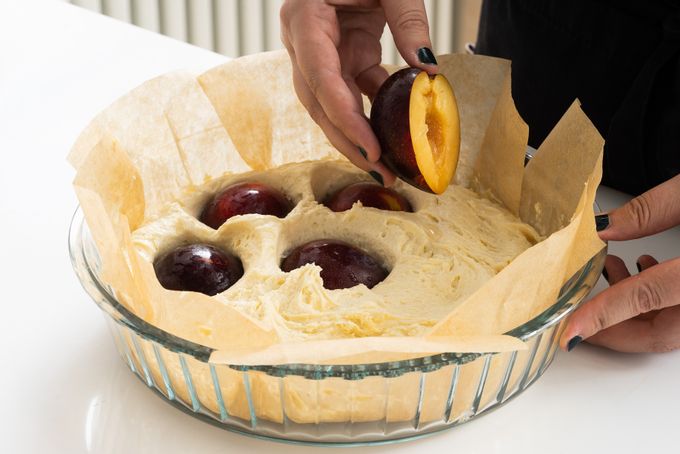 Mix the remaining sugar with cinnamon and sprinkle over the top of the pie. Bake the cake for about 45 minutes in an oven preheated to 180 degrees. Check the readiness with a skewer, pierce the center of the pie with it: if the dough does not stick, the pie is baked. 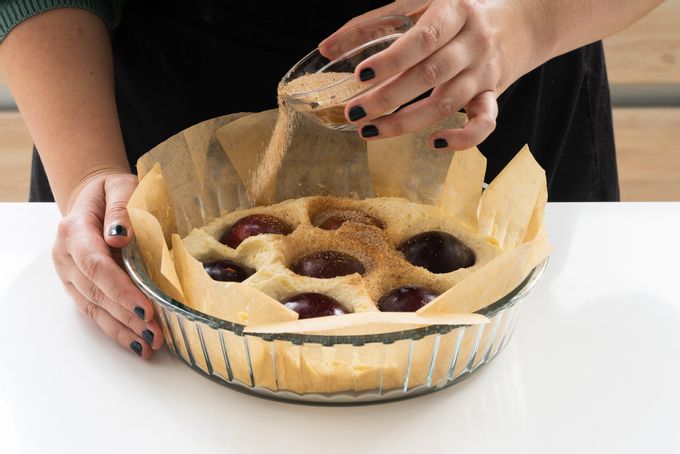 Cool the cake for 30 minutes: preferably on a wire rack so that it is not wet from the bottom. Serve the finished pie with tea, tastiest with whipped cream or a scoop of ice cream. 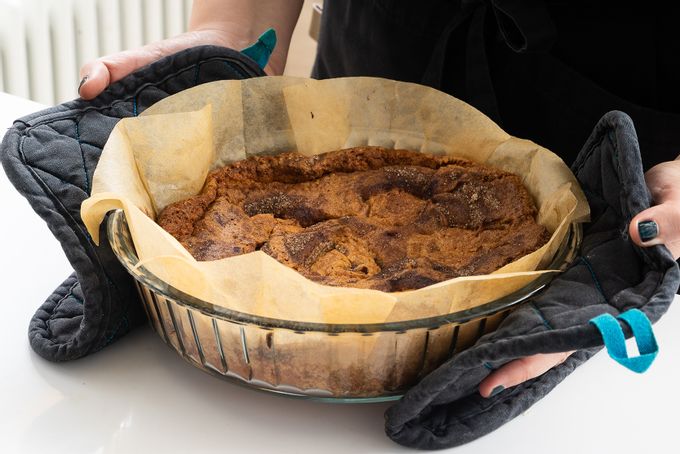